Berklee Blogs hears final thoughts  from Scott Beardsworth, Music Business Major, about  as he wraps up his internship at PAID, Inc.– a celebrity services organization focused on VIP ticketing events, merch, and other direct-to-fan marketing initiatives. In today’s post, Scott follows up on Part I of this post about how working hard for PAID set him, literally, on the road to work with Aerosmith

As I had mentioned, I was hired as Dave Lory’s executive assistant. When I was getting ready to start, I was slightly nervous, as I had never worked in a position like that, where someone relies so heavily on you, especially working under someone who has managed the likes of Courtney Love, Gregg Allman, Jeff Buckley, and started an Indie label (Artemis Records). The starting week was pretty much just a primer on how Dave preferred his office affairs be handled. Working so closely with someone in upper management gave me the chance to very quickly get a sense of how the company was structured.

About a month after I started my internship, it was time for the move to the new office. The new building is much more spacious with room to grow. After this transition, I really fell into a groove with Dave, and our working relationship was flourishing. I was taking care of all his schedules and travel arrangements. In addition, he brought me in to weekly creative, marketing, and tactical meetings, which I felt was a privilege. These experiences shed a lot of light into office etiquette, and helped me to show my co-workers the seriousness and eagerness I had to learn. As I had mentioned, I handled all of Dave’s travel arrangements. One of the more memorable tasks I had was to book all travel, and meeting arrangements for Dave and two other co-workers to Las Vegas and Los Angeles. The trips highlights included meeting with Motley Crue and their management, as well as meetings at various agencies and management firms for new business prospects. I helped to set all of this up from a logistical standpoint, and everything went off without a hitch.

About a month after our move into the new office, I got called up to the President of Client Services’ office, where he told me that Dave had accepted a position outside PAID. The departure was surprising to me, coming out of the blue, and left me unsure of my role in the company. I was assured a continued role in the company, which helped take some of the stress off. After Dave’s departure, it took me a few weeks to really get settled into any sort of schedule or consistent workload. Eventually though, I did settle into a more consistent role, splitting my time between assisting client manager Andy Martel, assisting the marketing team for new promotions and programs, and helping out customer service with VIP ticketing questions. The biggest change was going from working so closely with someone everyday, to having a looser connection to my supervisor. Not to say one is better than the other, but working as an assistant by necessity assures that direct contact is consistent. Dave and I remain in contact, and am grateful of him taking me under his wing sharing his experience with me.

I have learned a lot since I started in January. PAID has been extremely supportive of my career in the long term, and have really allowed me to try my hand in various aspects of the client services division, but also marketing, and to a smaller scale, business development. I would like to think that I have become someone in the office that offers a fresh perspective, as well as reliable work ethic. I know that no matter where my career brings me, I will not forget my first experience in the entertainment industry at large. Especially with the opportunity I was presented with for this coming summer.

As I had mentioned, Aerosmith is one of our larger clients, both in scope of work, (website management, online merchandising, VIP ticketing and experiences, Social media and content control) and also public persona (Steven Tyler as Judge on American Idol, as well as an historic 40 year career). This summer Aerosmith is set to embark upon their 20 date Global Warming tour, travelling throughout much of the United States and into Canada.

This summer, a new chapter in my career will begin, as I was asked to accompany our VIP road manager on tour with Aerosmith. My main role is to facilitate the fan experience for those who purchased VIP ticket packages from Aerosmith’s fan club or Ticketmaster. We will conduct on-stage tours, meet and greets with the band, as well other VIP services. When I started here, I never would have thought that my internship would lead to such an amazing opportunity, but that just goes to show you that opportunities can knock when and where you least expect it. I feel that if I can survive and thrive on the road with an institution such as Aerosmith, my short career will have gone through a pressure test, ensuring that I can handle most any situation thrown at me. Not a bad entry level gig if you asked me!

The internship process as a whole has helped me realize that the best way get involved is to simply dive in. No one in this industry (or any other for that matter) will know who you are, or what you are capable of unless you show them. When you couple that mindset with Berklee College of Music’s industry-centric atmosphere and education, I feel that I do have a leg up on many other young adults vying to get into this industry. I can talk the talk, now it is time for me to walk the walk!

Looking Down The Road

Shoring Up a Strong Foundation

From Last Minute to Top of the Pack

Snowstorms and Car-chases – All Part of a Day’s Work

A Day in The Life 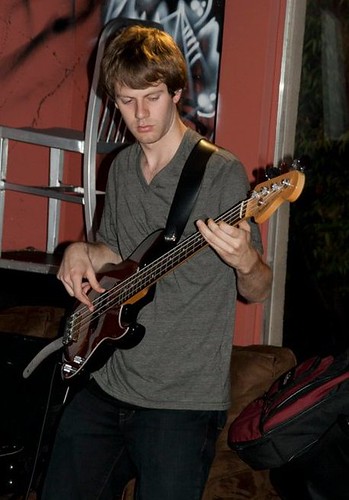 Scott Beardsworth has been studying music in some way, shape, or form, for the past 17 years. Starting on Piano and moving to electric guitar and tuba, until finding his true instrumental calling of Electric Bass. Upon acceptance into Berklee, Scott chose to pursue the Music Business major.

With an equal love for all things business and music, this major was a perfect fit, allowing him to learn the business ropes, in an exciting field, close to his heart. Most exciting to Scott was his required MB-495 internship. He remembers sitting at the first internship meeting in his sophomore year, thinking about how exciting it will be to get real experience in the field he loves. Two years later, Scott has started his internship at a dynamic company located in the Boston area. PAID inc. is a turnkey celebrity services outfit, specializing in VIP events, merchandising, online marketing promotion, video production and more. The company serves industry A-listers such as Aerosmith, Iron Maiden, Motorhead, and many more.

In his free time, Scott loves playing music with people of all walks of life and disciplines, especially with his two bands Goliath in Transit and Skylab. If anyone has questions or wants to reach out to Scott, feel free to do so on his personal Facebook, or by email at sbeardsworth@paid.com. Check out his band Goliath in Transit on Facebook!