The following post is from Ensemble Department professor David Hollender.

I was at Berklee at about 8:00 last night with banjo phenom Noam Pikelny and some students. Noam had finished two days of teaching just minutes before and everyone was upbeat when the phone rang. It was Matt Glaser calling to ask if I had heard the news that Earl Scruggs had died. The room got silent and Noam plopped down into a chair and put his head in his hands. When he looked up he said, “The world became a different place today.”

To this day Earl Scruggs’ playing remains the gold standard. His tone, touch, and timing were impeccable. His playing defined playing with drive and he breathed fire into the instrument. At times he played with a wildness that has never been outdone. (Listen to his last solo on “Farewell Blues”!) If young or casual listeners today hear him and think to themselves that what they are hearing is just typical sounding banjo they are failing to realize that Earl Scruggs pretty much singlehandedly created the vernacular of what we now recognize as bluegrass banjo. If something sounds typical is because everyone has been so heavily influenced by him. It simply did not exist before he played it! And every innovation in banjo playing for the past 65 years, including each and every one of the most contemporary players, rests squarely on the foundation of techniques and concepts that Earl perfected.

END_OF_DOCUMENT_TOKEN_TO_BE_REPLACED

Berklee kicked butt at the Lowell Banjo and Fiddle Contests 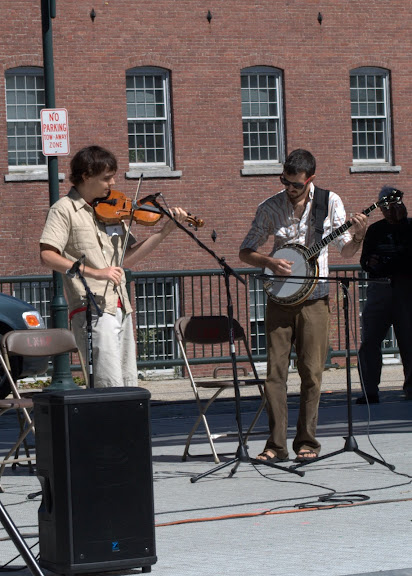 John Mailander and Kyle Tuttle play for gold at the 2010 Lowell Banjo and Fiddle Contests. All photos by Sam Stambler.