My internship experience at ASCAP is truly amazing. I’m gaining insight into different careers in the music industry. Several weeks ago I was invited to attend the Billboard Film & TV Music Conference in Century City / Beverly Hills.  Here’s a play by play of my day:

Left around 9am and began my drive over to Century City. Took me about 30 minutes to go 5 miles and find the parking structure. Very confusing parking.

Arrive at the Hyatt Regency. Picked up my guest pass and walked into a large room with hundreds of chairs and panelists on a stage.

The 2nd panel I caught had Matthew Weiner (creator) and David Carbonara (composer) from the series Mad Men on AMC.  They took us through their process of creating the musical soundscape for Mad Men.  It was valuable to hear their discussion and learn how they really interact during the making of the series. Mad About Mad Men

During the lunch break I was able to get a seat close to the stage.

END_OF_DOCUMENT_TOKEN_TO_BE_REPLACED

As many of you know, the Berklee experience is not an easy one. The Berklee drive inspires you to want to take on so many things at once. Some semesters at Berklee you have so many tasks you forget what a normal night of sleep feels like. Various careers pulled at me. I wanted to be a songwriter/producer, work at a label and be a film composer. There are only so many hours in one day! So much information was thrown at me I wasn’t sure my brain was retaining any of it.

Going into my internship at ASCAP I was nervous. How would I finally apply all of this information in the real world? Majoring in Music Business / Management let me experience classes covering the wide spectrum of the business, yet I was still unsure if I knew enough and could take the next step.

People will tell you there is no substitute for real world experience and they are right. Within the first couple of weeks interning, I truly felt it all come together. Jumping into conversations with everyone in my office over, I pulled knowledge from classes (especially Music Publishing, Record Company Operations and Legal Aspects). It all started to click for me.  I went from feeling worried about my foundation to feeling confident. Internships help you realize that what you learned did sink in, however learning in a classroom is only the first step. Your learning is not complete without applying your knowledge in real life situations.

END_OF_DOCUMENT_TOKEN_TO_BE_REPLACED 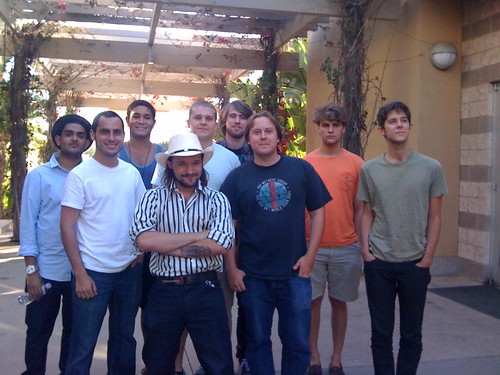 Welcoming the new LA interns for the Fall 2010 semester!

This group, the second that is 100% male, has (10) students total. Majors include Pro Music, Music Business/Management, Jazz Composition, E/PD, and MP&E. Setting a different trend from our Summer 2010 group, this group lacks Film Scoring majors. That’s OK! The LA Internship Program is open to all Berklee students 5th semester standing and higher of any major.

Students will be interning at a variety of companies including:

Stay tuned for updates from this group as they’re sure to have tons of information to share in the coming weeks!