It is with great sadness that we share the news that Berklee has lost another of its icons. Cherished faculty member, bandleader, composer, and drummer dynamo Ralph Peterson Jr. passed away peacefully on March 1 at his home in North Dartmouth, Massachusetts, from complications from a long battle with cancer. He was 58.

Ralph wrote, “My teaching style is energetic, intense, and no-nonsense,” and his teaching approach stemmed from his playing—unceasing energy, relentless intensity, absolute focus on the music, and powerful multidimensionality.

Sean Skeete, chair of the Ensemble Department, recalls having this conversation with Ralph:

Sean extended the metaphor: “Ralph lived his life and music big and out loud, giving himself over completely to all of his endeavors.” 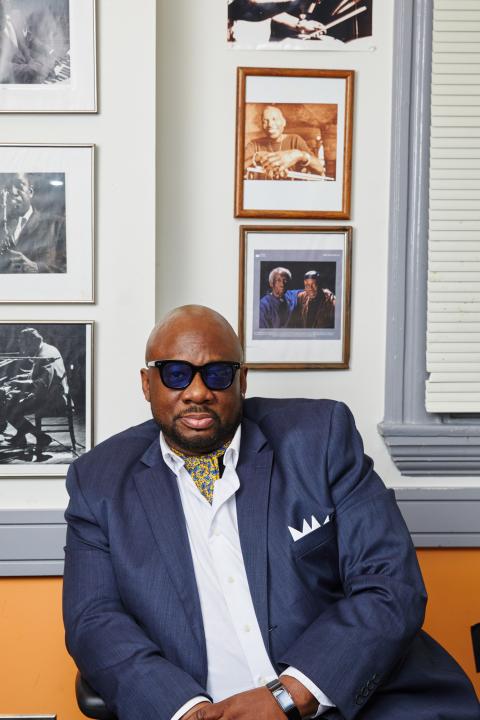 Ralph expected the same from his students. As he once said, “I try to inspire my students to push their own limits.” The stars have mercy on you if you ever happened to step on the bandstand unprepared, because Ralph certainly was going to give you a memorable experience in musical tenacity and excellence.

Determined excellence exemplified Ralph’s life. He began teaching at Berklee in 2003 while simultaneously working on a Bachelor of Arts degree from Rutgers University, which he earned in 2004. He started and managed his own music label, Onyx Productions. He was also a very good trumpet player, which was the path he was pursuing when he was originally accepted into the jazz studies program at Rutgers. He blended the mindset of a warrior with a healthy and positive attitude and gave mightily to his students and mentees, deeming them also “warriors.”  In this way, Ralph was also teaching what he practiced; he ran a taekwondo studio in Boston for many years and, in 2019, received his ranking as a fifth dan black belt.

During his Berklee years, Ralph taught many private lessons at both the graduate and undergraduate levels. Ralph fueled the growth of many of jazz’s current and future leaders. His list of students includes some of today’s top drummers, including E. J. Strickland, Tyshawn Sorey, and Justin Faulkner.

He also taught a variety of jazz ensembles, courses in jazz repertoire and application, and the music of Art Blakey. The connection to Blakey was an organic part of Ralph’s musical evolution. Ralph maintained he was “fortunate to have apprenticed under some of the greatest musicians in jazz”—that included Blakey as well as Betty Carter, Elvin Jones, and Walter Davis. Ralph was handpicked by the legendary Blakey for the bandleader’s Jazz Messenger Big Band and served until Blakey’s death in 1990. Ralph also performed with Michael Brecker, Carmen Lundy, the Lincoln Center Jazz Orchestra, Don Byron, Don Braden, Walter Davis Jr., Jon Faddis, Terence Blanchard, Branford Marsalis, Stanley Turrentine, David Murray, the Count Basie Orchestra, Sean Jones, Ravi Coltrane, Tia Fuller, and Betty Carter.

As bandleader and artist, Ralph created several recordings: The Reclamation Project and The Fo’tet Plays Monk (on Evidence); Back to Stay and Triangular 2 (on Sirocco Jazz); The Art of War, Subliminal Seduction, Test of Time, and The Fo’tet Augmented (on Criss Cross); V, Triangular, Volition, Presents the Fo’tet, Ornettology, and Art (on Blue Note); and Outer Reaches, The Duality Perspective, Alive at Firehouse 12 Vol. 1, and Onward & Upward (on Onyx Productions).

Ralph’s loving and honest input inspired many, and he always gave his all. He gave to music and the art of drumming. He gave to the great jazz legacy that he so proudly represented and extolled with the fervor of a sanctified preacher. He gave to his students and to all those who were blessed to call him friend, colleague, partner, bandmate, and coconspirator.

Yoron Israel, chair of the Percussion Department, remarked on the deep loss that Ralph’s passing means for Berklee and the percussion community, stating that “from the time I met Ralph, in 1985, he consistently exuded extraordinary determination and perpetual forward momentum in his talk, dress, music, and life. Even amid his health crisis, as a mentor, colleague, and friend, he continued to inspire us all to push forward in excellence, including in our relationships with one another.” Ralph’s Percussion Department colleague Joe Galeota added, “I appreciated his unconditional love and effort to fight courageously through his illness, not wavering in his commitment to his students, family, and friends. Ralph is a real hero.” “An example of musicianship and courage,” emphasized Ricardo Monzon, professor in the Percussion Department. Kenwood Dennard summarized the sentiment lamented by many Berklee colleagues that “the loss of Ralph Peterson is a huge one for me personally, professionally, and educationally.”

Nate Chinen of NPR Music described Ralph’s style as a “sheer, onrushing force” in an “explosive hard-bop mode.” Another of Ralph’s percussion colleagues, Casey Scheuerell, lamented that he “will miss the long cyclical polyrhythms Ralph could get going and his jam sessions with students.” Sergio Bellotti, also a faculty member in the Percussion Department, maintained that “the heavens have gained so much extra groove, swing, and power!” And percussion colleague, Mark Walker, cautioned that “we all had better swing harder, because he is listening!”

Ralph’s next album, due out this spring, features former students Luques Curtis, and his brother, pianist Zaccai Curtis, along with vocalist Jazzmeia Horn and Berklee percussionist Eguie Castrillo. He titled it Raise up off Me, referring in part to the experience of Black Americans with law enforcement. Two weeks before his passing, Ralph took the time to play me (Ron) all 13 tracks, excitedly recounting all the details of each arrangement, and giving an assessment of each band member’s performance.

Ralph loved his students, and he loved teaching at Berklee. He wrote that he taught total musicianship, which involved “hearing and playing beyond the drum set. Understanding form, melody, harmony, and phrasing all have a profound effect on what a drummer plays.”

Ralph transferred that profound impact onto jazz and into Berklee. His style, playing, and music have been described as possessing agile dynamism, lunging propulsion, and risk with triumph.  He was viewed as a powerful steward of the acoustic hard bop tradition and a jazz missionary with a palpable desire to move jazz music forward.

Percussion colleague Marcello Pellitteri reminds us that Ralph “is still with us through the echo of his words,” and Danielle “Queen D.” Scott, assistant chair of the Ensemble Department, found comfort from Ralph’s words in his recent Zoom event, Reflection with Ralph Peterson, that he, as she paraphrased, “will live forever through us, his students, and his music.”

Spreading the power of jazz music was Ralph’s mission, and the music was the message. In pursuing that mission and conveying that message, Ralph never held back. His understanding of the need to be brave and fearless in pursuit of one’s musical journey and development were foundational elements of his approach in leading young musicians. Giving without reservation, without holding back, is a simple but profound measure of Ralph’s legacy to which we can all aspire. In this time of reflection, let us all commit to honoring our beloved mentor with not-so-small acts of love, support, encouragement, honesty, repentance, accountability, and shared respect for each other’s potential to influence our world and make it better for all. In that sense, Ralph is still giving.

Ralph Peterson is survived by his wife, Linea; daughter, Sonora Slocum; stepdaughters, Saydee and Haylee McQuay; and spiritual daughter, Jazz Robertson. His family seeks to establish the Ralph Peterson Jr. Scholarship Fund to support Berklee students who are financially and academically deserving with the potential to make a significant contribution to society through music. We invite you to make a gift online, or if you would prefer to donate via check, please note “Ralph Peterson Jr. Fund” on your check and send to:

If you would like support, we encourage you to seek our counseling services for students, faculty, and staff.

We invite you to share stories and memories about Ralph in the comments below.