Berklee Blogs follows Carla Martinez, a Professional Music major  and participant in Berklee’s Summer Internship Program in New York City. In Today’s post, Carla tells Berklee Blogs how the OEL‘s internship programs are getting her close to the action on Broadway

Greetings from the Big Apple! When I first discovered that Berklee was starting an internship program in New York City, I didn’t waste any time when it came to applying. I was the first person officially accepted to the program. As the only student in all three internship programs working strictly in theater, this journey has been one I’ve been dying to share with people. I’ve been a musical theater performer since the age of four and I knew that I wanted to stick to my roots when choosing an internship.

I’m interning for Marquee Merchandise, Matt Murphy Productions, and the BroadwayStore.com! It’s definitely not the performance internship that I originally wanted, but I couldn’t go wrong with this one. It gives me an inside look into production and merchandising for Broadway, a part time job working at their merchandise booths in the theaters, AND a stipend at the end of the summer! How cool is that?! They’re also incredibly flexible and have allowed me to switch days so that I’m able to go to auditions!

The company does the merchandise for the following shows: War Horse, Other Desert Cities (just closed), Memphis (closing August 5), Stomp, and Old Jews Telling Jokes. Our job on Mondays is to go to the theaters, pick up the merchandise forms/money from the booths, then bring them back to the office so that we can input them into the computer. Some of the theaters aren’t very close in proximity. War Horse is up by Lincoln Center and Stomp is down by NYU; the others are scattered in midtown.

The BEST part about running around to the theaters is that we get to go in through all of the stage doors! I feel like this is any musical theater performer’s dream (some of my friends can agree!) I’ve gotten to see some of the dressing rooms, costumes, and even some of the sets! I can’t wait for the day that I get to walk in as a performer! 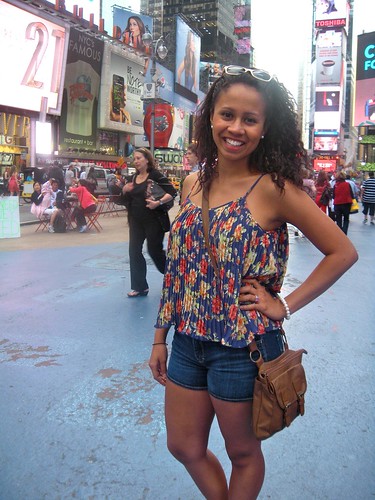 Carla Martinez is a Professional Music major with a minor in Drama. She is starting off her senior year by interning for a Broadway production and merchandise company in New York City. She was born in Rio Piedras, Puerto Rico and grew up in Cape Coral, Florida. A singer, actress, dancer, and choreographer, Carla has performed all over the U.S. and the Caribbean.

At Berklee, Carla keeps plenty busy with all things musical theater as the President of the Musical Theater Club and choreographer for multiple productions. She is also a Peer Advisor and has thoroughly enjoyed everything that comes along with being a student leader!

After graduation, Carla plans to move to New York City and continue working professionally in musical theater. She is a proud Equity Membership Candidate of the Actors Equity Association and is excited to become a member once she books her first Broadway show. To contact Carla, you can email her at cmmartinezATberkleeDOTedu.