Throughout my time at both major companies, heavy emphasis was placed on the promotional side of the industry, which was very interesting to me as I had yet to take some of the marketing classes required for the business major at Berklee.

For the month of June, I interned at Sony Music under Spiro Damaskinos, Director of International Artists’ Relations and Marketing. Tasks I completed for him included voiceover scripts for the “Sex And The City 2” motion picture soundtrack’s video trailer clip, as well as the clip for Jennifer Rush’s new album trailer. Both aired on all major South African television channels during Summer 2010. I also completed the label copy for a compilation album called “Now 55”.

Part of my internship included driving around with other Sony employees as they delivered music video masters to broadcasting houses (such as Red Pepper, Urban Brew, Channel O (Mnet), MTV Base). Being that this was the summer of the FIFA World Cup in South Africa, we also dropped off new World Cup albums. “Listen Up” was the official FIFA World Cup album. “Hello Africa” was a double-disc compilation album that many African artists are on. We brought this to the main magazine printing publishers. I was able to sit in on many of the weekly FIFA meetings (Sony was one of FIFA’s main partners) and it was interesting to hear about all the plans for Shakira, Alicia Keys and R.Kelly’s arrival before the soccer kick-off concert in Johannesburg.

Towards the end of my time at Sony, I took on a very big project. I had to make Powerpoint slides for some of the main local artists that Sony Music represents for a branding initiative in which Sony “markets” their artists to other South African businesses for package deals. Once I finished the artist slides, they would be presented to the artists/bands for approval, and then used in the marketing meetings with said businesses. This was huge for me, especially because it showed me that they trusted me to handle a project that was that important for their company.

One morning I drove to Soweto with Sony rep Scooby Fassie – who was on his way to drop off that week’s radio singles due for airplay at one of South Africa’s biggest radio stations – Jozi FM – and when we arrived there, I met the DJ who was on air at that moment – DJ Donald Duck. He asked me for an interview on air and of course I said “Yes”! Donald introduced me and spent 10 minutes live, on air, asking me questions about Berklee, my degree, as well as my internship. It was definitely one of the greatest experiences of my life, especially when he told me that half a million people were listening at that particular moment!

Stayed tuned for next week’s installment about my experience with Warner Music Gallo Africa! 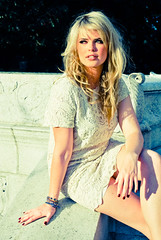 Mia Verdoorn was born and raised in Pretoria, South Africa. She began piano lessons at the age of 11 and voice lessons at 14. At the age of 19, she left South Africa to pursue her career in music at Berklee College of Music in Boston, Massachusetts.

Mia’s worked closely with prominent music producer and judge of the South African version of “American Idol” (“Idols” in South Africa) but decided to put the release of her first Afrikaans album on hold to complete her studies. She is a dual major in Vocal Performance and Music Business / Management. In addition to being a performer, Mia is also a songwriter and holds regular performances in her hometown of Pretoria whenever she returns.

Mia is the recipient of a Berklee Achievement-based scholarship (BEST). She is a writes for Berklee’s Music Business Journal and has contributed to upper-semester students’ projects via performing and recording. She’s made the Dean’s List for seven semesters in a row.