I named my computer at work NEUTRONIUM (get it? pulsar?)

because everyone I’ve met at Berklee PULSE is awesome.

My first two days with the crowd were speckled with free food and free learning, as I attended teacher seminars (does that make me a teacher? Possibly an Internet teacher. Actually my parents have been excited at the idea of calling me a teacher, so they’ve been telling everyone I am. Society points!)

I loaded up with tea and coffee, and took my two cups over to Fenway for Making Sense of DIY Marketing Madness where Stephanie Kellar and Pam Kerensky talked about how people promote and sell their music online. Their thesis is that DIY is only a means to an end, and that the artist has to bootstrap his or herself up to the point of thousands of fans before big business will notice them and take it from there.

A DIY musician seeks out superfans — fans that will obsess and buy everything you have…just because. Superfans like to have access to secret, forbidden artist things not available to the public. But I interpreted this to go even further, and that perhaps the best superfans are the ones the artist maintains personal relationships with. In particular, perhaps your best superfans are other musicians who 1) have fans of their own and 2) are influenced by your music. To cite an example I said “yeah my friend is a DJ, and he remixed one of my songs live, and a bunch of people were interested in what my song was, and I got a bunch of fans” but actually I totally lied and that never happened.

Between talks I had the

Ravi Shankar experience. He couldn’t make it to Boston physically, but since Indian philosophy doesn’t really give too much preference to the physical self, it was all right.

Beautiful performances! A guitarist/drummer duo played a raga-style improvisation. I had never seen an electric guitar played to sound like a sitar before! The guitarist did all these quick slides, which were reminiscent of string-bending and such on a sitar. The drummer played the tabla part with a bit of jazz, and it was really cool. I got a strong feeling that they were going to break into some call-and-response at some point, but they didn’t.

Another girl did a Hindu-like dance (I’m not sure what they’re called). But it felt as if she was telling the story of creation with her body language. I met her later and I told her I was convinced she was levitating at the end.

Finally the show concluded with an Indian/jazz super-group, which was really incredible. They all communicated and flowed really well. The details were improvised but the structure was planned. I payed attention to the dynamics between the drummer and the tabla kid. The drummer had such an awesome perception of dynamics, and knew when to not to play. The girls had incredible voices. You could tell the saxophonist was just waiting to bust out the dissonant free-jazz, and the pianist would echo his free-form. Seeing this kind of professional musicianship was so mind-boggling, especially after being to so many basement screamo/hardcore/grindcore/indie/post-rock shows in Allston. I think musicians don’t focus enough on the aesthetics of timbre and dynamics.

The second talk was about scoring video games and the techniques used in the industry. The most popular technique at the moment is layering. Musical pieces are broken into their stems. Depending on the action of the user, stems will fade-in or out. Example: imagine a first-person shooter; your character is running through the jungle. You hear an steady ambient drone. There! In the distance you spot enemy soldiers, and tense strings fade in. You approach them for battle; the bass+drums kick in; and the music reflects the exciting gameplay. Aha! The enemy is defeated, and the tenser stems fade out again to the drone. Very interesting stuff.

I got the idea of performing music live like this.

Step 1) Build a game scored with the stems of my songs.
Step 2) Play the game live [project the video so the audience can see]

Actions in the game would determine the course and direction of the music — and I would play the game like an instrument. Preferably, It would have to build a pretty involved game (whose actions clearly directed the music), AND something which I could take in any direction on a whim, OR a familiar game (like Tetris) which I would augment with my music.

Read on! My next post follows me on my second day of Berklee teacherfest. 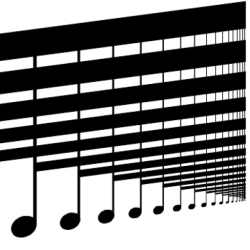 The Word Maven of Athens